Guam is the southernmost island in the Mariana Archipelago and the largest island in Micronesia. Guam is one of the original members of the U.S. All Islands Coral Reef Committee (AIC).

GUAM’S CORAL REEFS
Guam is home to 5,000 species of marine organisms, many of which rely on healthy coral reefs. In Guam’s nearshore waters (0-3 nmi), the combined area of coral reef and lagoon is approximately 69 km2 – nearly 13,000 American football fields! Coral reefs are important to the economic, cultural, political, and social viability of Guam. A 2007 study estimated Guam’s coral reef resources to be worth $127 million/year. 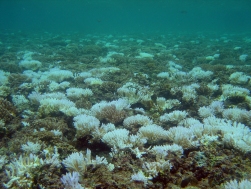 THREATS
Guam’s coral reefs are under stress and being degraded from both natural and human impacts. There are numerous threats to Guam’s coral reefs every day including, sedimentation and crown of thorns outbreaks. These threats (and resulting impacts) will be compounded by threats posed by global climate change.

AGENCIES
In 1997, the Government of Guam established the Coral Reef Initiative (CRI) to address threats to the reefs. The Department of Chamorro Affairs, point of contact, the Bureau of Statistics and Plans, Guam Coastal Management Program, Department of Agriculture, Division of Aquatics and Wildlife Resources, and Guam Environmental Protection Agency lead most of the efforts of the CRI. 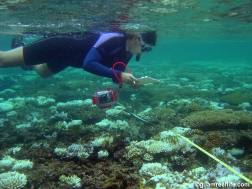 We will let you know when the next meeting of the US Coral Reef Task Force is scheduled. Find out more at the USCRTF Website

A blog about coral reef-related people, places, and projects in the U.S. and Freely Associated States.